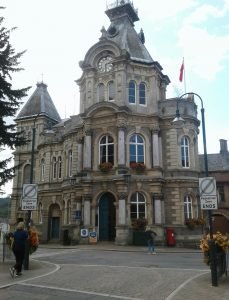 Tiverton, known locally as Tivvy has a population of around 20,000.  Despite being in the North-East part of Devon, it is the administrative centre for Mid Devon District Council.  The name is derived from Twyverton / Twyyfordton, meaning “town with two fords”.  The name Twyford (two fords)  is still in use, including Twyford Inn and Twyford Place.
The town sits at the meeting place of the A396 and the A361.  Straddling the river Exe as well as the river Lowman, it’s a great place to visit if you’re leaving Exmoor by canoe and looking for somewhere to stop off before Exeter.

Tiverton has a proud history as a market town, having held a market since at least 740.  Monday was market day until 1655, when it was realised that the devastating fires in the town in 1598 and 1612 were the result of Gods wrath at people working on the sabbath to prepare for market day.   This was resolved by making Tuesday the market day and God then refrained from having a proper go at burning the town down, until the great fire of 1731.  There is no record of what caused Gods wrath on this occasion.  Until 1971 when the cattle market was closed, cattle were driven through the streets of Tiverton to get to market. 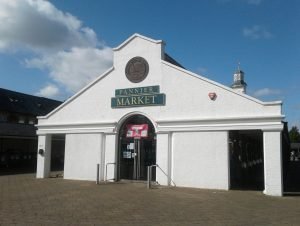 The building that houses the market to this day, was built in 1830.  It is open 6 days a week with a second hand market on Monday, general markets on Tuesday, Friday and Saturday and a mini-market on Wednesday and Thursday.  As well as the main building, there are a number of separate undercover stalls, allowing the town to host a sizable market whatever the weather.  It’s a great place to find locally produced food, drink and crafts, as well as a miscellany of other goods.

Tiverton is on the Grand Western Canal. This canal hasn’t quite lived up to its original grand plans. It was going, to take freight along a route from the English Channel to the Bristol channel, but was never completed. It does however go from Tiverton, all the way to Lowdwells Lock which is 11 miles away. The canal is run as a country park and nature reserve. You can go along it in a horsedrawn barge, or hire a boat to go out on your own. You can eat in another barge which has been converted into a café with a licensed bar or at one of the eating establishments along the way. Where it failed as a way of transporting freight, it’s made up for that by being a nice place to be. Tiverton has a railway station which is only 8 miles from the town centre. It’s very close to the canal, so you can travel by boat, should you wish.

Tiverton has a surprisingly good museum for such a small town. The  Museum of Mid Devon Life is great. It specialises in social history and the lives of ordinary people and provides fascinating insights into the development of agriculture and industry in the area over the years. Originally it was housed in the back rooms of a pub, but they’ve relocated to an old school building, so you can’t get a beer there anymore, but you can see the Tivvy Bumper which is a steam locomotive used on the Great Western Railway.  Where other museums concentrate on the lives of the rich and famous, this museum makes history come to life by illustrating the lives of folk like you and me. 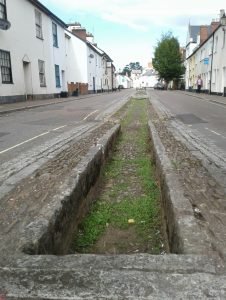 In the 13th century, Countess Isabella of Devon came up with a very novel gift idea and gave the town a leat. A leat is an artificial waterway. This one delivered water from Norwood common to the town centre. Every 7 years, during a medieval ceremony known as “the perambulation of the leat”, any obstructions are removed and the right to the water is claimed by the bailiff for “for ever, for the sole use and benefit and as the right of the inhabitants of the town of Tiverton”. Unfortunately, Tiverton appears to have lost it’s leat. The water no longer flows down the middle of Castle Street or bubbles up from Coggan’s Well in Fore Street. No-one seems to know what has happened to the water and there’s a petition to save the leat.

Theophilus Polwhele was a priest in Tiverton and the singer songwriter Pete Vuckovic was born in the town. Former prime minister Lord Palmerston was an MP for Tiverton, but undoubtedly the most famous resident of the Town is Mango the cat that hangs out at Tesco.

He’s got his own facebook page with 18,000 followers and the story of him hanging out at a supermarket has been covered by BBC news as well as a number of other publications and outlets.

Tiverton Castle is a masterpiece of an eccentric visitor attraction.  Before covid 19, it was open on Thursday and Sunday afterno 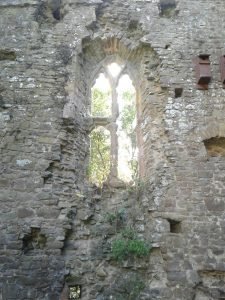 ons in season, it is very much the opportunity to visit a private house that happens to have a castle in the garden.  There are collections of historic artifacts, which give it the feel of a museum, but these are definitely someones private collections displayed in their private house.  You don’t get the National Trust experience here, you can sit on the chairs, there are steep steps and cliff edges, so it’s probably best to keep your children close if like them.  You’ll be greeted by Mrs Gordon, the owner who gives a brief history, architecture and safety talk to each guest as they arrive.
The castle was probably completed in 1106.  It was built by Richard de Revers, under the instruction of Henry the 1st.  It defended the ford across the river Exe which was a strong strategic position.  Seven successive Earls of the de Revers family owned and maintained the castle until the male line of their family died out.  It then went to Isabella de Fortibus, who assumed the title of Duchess of Devon.  Her cousin Hugh de Courtenay  inherited it in 1293 and the Courtenays the held it until the 16th century. 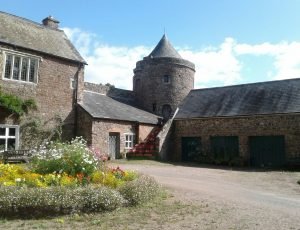 Having been maintained as a defensive position for over 500 years, the castle finally saw action on the 19th of October 1645 when Sir Thomas Fairfax’s troops who had been in Tiverton for a couple of days, decided to attack.  Within 2 hours, the had hit the drawbridge chain with a lucky cannon shot, walked into the castle and taken it on behalf Parliament.

We are very pleased to be able to offer an online version of the History of Rackenford, written by Sarah Childs and available as a hard copy in Rackenford Community Shop. Rackenford is a village near Tiverton.